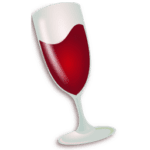 Wine “Wine Is Not an Emulator“ is a cross-platform binary distribution software that aims to allow application software developed for Microsoft Windows to run on Unix-like operating systems, such as Linux and OS X. It works with Common Desktop Environment (CDE) applications that use the Windows API and the Windows Presentation Foundation (WPF) controls.

It is a free and open-source compatibility layer that aims to allow application software and computer games developed for Microsoft Windows to run on Linux operating systems. The slightest change is the most considerable, most minor improvement!

Wine is the world’s most popular open-source software package. It provides a set of libraries that make it possible to use software written in other languages on Linux distributions, including those before Ubuntu.

! Laws concerning this software use vary from country to country. We do not encourage, compromise, or tolerate using it to violate these laws.